It’s been a bit since my last update, and luckily that’s been because I’ve been so busy.  (Imagine how sad the update would be if it was like, “Haven’t written lately because I’ve been so sad and bored with life” or something like that.)  Writing from the disgustingly depressing JetBlue terminal at Los Angeles International Airport right now.  Also I finally understand how the South feels – THEY TOOK MY HAIR SPRAY!

The first and arguably most important update is that I have packed up all my belongings Beverly Hillbillies style and moved across the country to Los Angeles.  That was a difficult decision in and of itself – leaving behind not only everything and everyone I’ve ever known, but also the fact that included in that group are some of the kindest and most supportive people one could have in their lives.  My inability to react emotionally in the moment left everyone thinking “Well, that was easy for him,” when my 5 day trek across the country was actually filled with tears.

The first three days I holed myself up in my apartment, partially out of denial and depression, but mostly because I was terrified that I was going to most definitely get killed on the freeway the first time I drove onto it as an LA resident.  I eventually did a Tuesday afternoon test run to Target in Glendale (maybe a 5 mile drive, including a mile of freeway).  I was crawling out of my skin the entire way but felt so relieved – proud, even – when I reached my destination.  Suddenly driving for 5 miles on a slow Tuesday afternoon made me a seasoned professional.  And on the way home, with my newfound confidence as an obviously aggressive LA driver (the type your mother warned you about), I of course got into the wrong lane for a turn and the guy behind me laid on his horn for a solid 45 seconds.

But I acclimated to Los Angeles pretty quickly.  Maybe it was being in a car for a zillion hours on the way here that made me somehow at peace with the idea of being in traffic constantly.  At the end of the day, it is hard to argue with this weather out here.

In the meantime, The Moth has continued to be super kind to me in letting me share my story in even more places, including London (!!!), New York, and in Anaheim at the Now Hear This podcast festival.  This week I’ll be in Worcester, MA and in mid-November I’ll be performing in Kansas City, MO.
Living in Los Angeles has been nothing short of a dream so far.  What other city in the world can you go to a show on a Sunday afternoon and end up getting plucked from a crowd to be onstage saying lines with your a handful of your favorite people in comedy (See me in Andy Richter’s Home For The Holidays, this December on SeeSo, because this city is a beautiful creature.).  I’m finally used to seeing palm trees and celebrities everywhere I go.  I’m finally used to the sun shining all day, every day.  I’m finally used to the barrage of Australians on a six-month holiday.  Even on my worst, most frustrating day, when I’m missing my family or my friends or my favorite happy hour spot back home, the city smiles at me and reminds me that I’m ok. 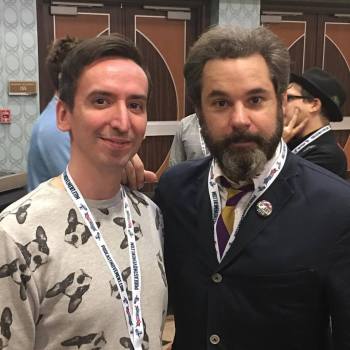 As I said, this past weekend I performed for The Moth again as part of the Now Hear This festival.  The people involved in this festival are absolute gods in my world.  To see Scott Aukerman and Paul F Tompkins in the flesh is one thing, but to be on the same bill as them is another.  I know my status pales in comparison but it’s a hell of a start.  My all-access pass to the green room allowed me direct contact with some of my heroes.  Can I try to explain what it’s like to have Scott Aukerman shake my hand and introduce himself, then gesture for me to take a seat at the table with him and talk over a glass of wine?  I have spent the last several years idolizing this man and now he is asking me questions about me and 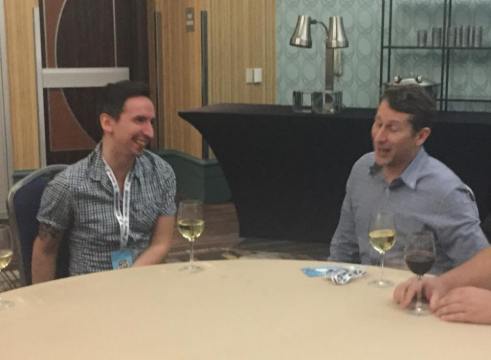 my life and my work.  Granted, he probably didn’t give a shit and wasn’t listening, but he did an amazing job of making me feel like I was worth something to him at that moment.  Before I know it, I’m looking around and all of my favorite comedians are in the room, at my table, chiming in on the conversation.  I was shocked, excited, scared, thankful, and ready to fucking explode.

And that’s kind of still how I feel every single day in LA.